Crowds of Barlickers gathered at the site and on hillsides around to watch the chimney demolition.

Despite a round of applause and cheers for the completion of the job, there was a sense of sadness at the disappearance of the chimney from the town’s skyline.

The chimney demolition was a traditional affair with Blackburn firm Warburton’s Steeplejacks felling the chimney Fred Dibnah-style. A large section of the brickwork at the base of the chimney was carefully removed and the bricks replaced with timber props.

A bonfire was then built around the base and it was the responsibility of mill owner John Clark to set it alight.

Half an hour later, with smoke billowing from the chimney for the last time and the last of the props burnt through, steeplejack John Warburton hot-footed it to safety as the 200ft. structure fell.

His signs to move were when a beer bottle placed in the brickwork broke and white plaster painted on the outside cracked.

There was a tense moment just before the chimney demolition when the chimney’s copper coronal band sprung free from rotten bolts and crashed down, landing on the perimeter fence close to where Mr Warburton was observing the fire.

He calmly said after the felling: “You often get bits falling off.”
As Mr Clark watched with his wife Joan, they said it was a very sad but inevitable day.

He said: “With around £50,000 of business rates on keeping an empty building and no income from it, it doesn’t leave you with much choice.”
The Fernbank Shed Company was set up in 1913, with Joan’s grandfather Hartley Edmondson one of the founding directors.

The mill passed to Joan’s father Ted Tillotson in 1931 and then, having been with the firm since 1951 and marrying Joan in 1954, Mr Clark took over the running of the mill in 1970.

Weaving ceased in 1980 and premises was let to various tenants.

The chimney demolition was also significant for steeplejack John Warburton. After 45 years in the trade since leaving school at 15, the Fernbank chimney was his 90th felling and he had some of his family and friends there to mark the milestone.

John Taylor from Hardcore Crushing Ltd, responsible for demolishing the rest of the Fernbank Mill site, said: “For all the talk of high reach excavators, robot demolition machines and advanced dust, vibration and noise monitoring systems, it is nice to know that there’s still room in the modern demolition world for something a little more ‘old school’ in nature.”

The firm’s work at the site is set to be completed by the beginning of next month and Mr Clark said he hopes to sell the land on to developers for housing when the economy picks up enough. 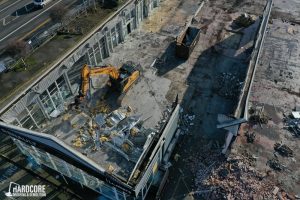 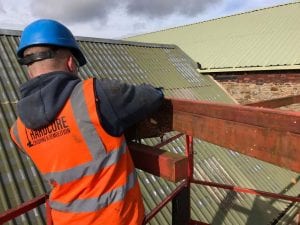 Hardcore Crushing Ltd have recently renewed our SSIP (Safety Schemes in Procurement) Health & Safety accreditation, which have had assessed through the UK’s award winning

Read More »
GET IN TOUCH WITH US